I know, some of you will say this is too soon. But, is it? When is it ever the right time to have difficult conversations? We saw what happened in Buffalo when a Black community was devastated by a terrorist. One who made it clear he despised ALL of us too because people from Latin America aren’t “culturally white”. Then, there are the cops in Uvalde, Texas.

Indeed you’ve seen the videos and heard about the reports. They’re not good. Cops dressed in military gear proved their worth as they stood around and did nothing while children were being murdered. It took a federal force, Customs and Border Protection (CBP), to stop the shooter. It also took 40 minutes to an hour for that to happen. Maybe it’s just me, but I expect someone dressed like G.I Joe to act like G.I Joe. I guess to them it’s about looking cool and that’s it.

Let me start by saying that I don’t want to hear anything about how many cops were Latino or Hispanic. They all answer to someone and in every video I’ve seen, they’re taking orders from white bosses. At about the 5-minute mark in an hour-long video posted to Facebook Live, an officer is seen yelling at a parent saying, “because I have to deal with you!” as he shoves them and tells them to stand across the street.

As the authorities conduct a routine investigation of the police response, many questions have yet to be answered. What is clear, however, is that white power structures are not invested in our best interests. Uvalde provides yet another example of this. From the mayor and local cops to the Governor, Republican lawmakers, and State police, none are interested in caring about us.

There are subtle hints. The most obvious is the silence white people want to force on everyone when a terrorist is white – as we saw just days ago with the Buffalo shooter. But when a mass shooter is non-white, they spread their names, words, and pictures everywhere. I’d say it’s odd but it isn’t. It’s the racist nature of the good ol’ U.S. of A. That’s how they see us.

Then, there are more glaring hints. They’re more like a bullhorn. The reality of how white people see the Latino community, no matter how white some Latinos pretend to be, reared its ugly head just days ago in Uvalde. It stood by and held parents at bay. It refused to attack the attacker. It held a defensive position against children’s guardians. It participated in the robbing of life.

It showed its face in a press conference held by a bunch of white people and hosted by Greg Abbott talking about “we” this and “we” that. They gloss over how they cut funding to our communities, stripped us of our voting power, and convinced many of you to elect old-white racist men to be your leaders. They convinced many of you that you’re white like them.

Guess what, you’re not. And they will always remind you of that.

The 18-year-old shooter in Uvalde may have been born in North Dakota. He’s what members of hate groups, extremists, or conservatives alike would call, “culturally white.” They would embrace him because he may promote their ideology. But they would also argue that he could never be white because he looks too Latino. Or should I say, “too Messican” as most hicks would say? They will find a reason to look down on us when they should be looking up.

In my article, “White Latinos Don’t Exist, Wannabes Do,” I emphasized how whiteness excludes us no matter what saying, “Hate groups might welcome you as one of their own but once they manage to maintain their superiority over all of us, you suddenly become a target.”

Looking at you, Enrique Tarrio.

“If you’re one of those Latinos who takes sides with the hate America breeds, you are complicit in normalizing the oppression, murder, and cultural genocide of your own people. If you find yourself taking sides with white supremacists, I hope this piece shines a light on what you are doing so you can stop being so fucking mediocre.”

Oh yeah, I went in hard and I won’t apologize for it.

There’s a lot being said about some members of the Uvalde community being right-wing, Proud Boy(ish), “F**k Your Gun-Free Zone”, Kyle Rittenhouse supporters. While I have been able to verify this via various groups and social media posts. I’ll spare you the distasteful things being said about people for it. Now is definitely not the time for any of that. So, if this is you, stop it.

Instead, this should serve as a reminder to every Latino in the United States that white power structures aren’t here to serve you. They’ll allow you to serve them if you’re willingly ignorant enough to spread their hate. But they will never go to bat for you. If you don’t believe me look no further than Texas. The conservative leadership you support is stepping on our necks right now.

White people are obsessed with Black and Brown death. They have dehumanized us so much that they only care about us when someone they hate is in office. They refuse to tackle hate and extremism by excusing it with the words “mental illness” and using terms like “evil” to pull the curtain over how the US society radicalizes people to commit mass murder.

School shootings and mass murder are uniquely a United States thing. They’re happening with greater frequency year after year. We can’t overlook this anymore. Latinos can’t keep buying into it either. Just know that if you supported Kyle Rittenhouse you supported the path that continues to lead us to the realm of hate-driven mass murder.

To a place of using weapons of war to settle grievances with society.

But go ahead. Keep voting for the Republicans who stripped mental health care and didn’t sign up for the Medicaid expansion to help ease mental illness in the state; the same guys who loosened gun laws making it easier for a young man to buy guns and ammo and plot the mass murder of children; the guys who continue to promote division and hate for all of us.

They’re just going to keep working against you.

In other words, stop trying to be white and come back to the real world with us. With family. 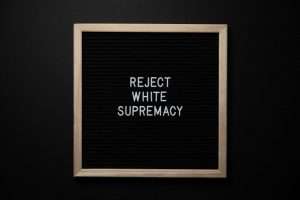 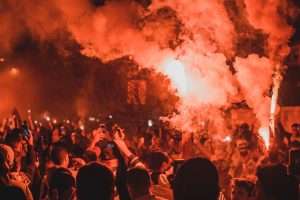 Arturo Dominguez May 23, 2022
About The Antagonist
Antagonist Streetwear
On Social Media
Support Us